The sky was clear on the coast this morning so we decided to head up to Oaken Wood on the border to hunt for Wood Whites which were reported to be out in the area.
Male and female Orange Tips and a Speckled Wood patrolled the rides and then we came to an intersection of forestry highways.
I spotted a butterfly which I assumed was a Small White until it landed and I started taking macro shots. It looked quite different from a Small White and I soon had it confirmed as our target butterfly. It is a very delicate looking insect, smaller than the Small White with lovely black patterning.
More soon turned up, flew together and separated several times. At least three were sighted at the crossroads. One harassed a female Orange Tip. Every time the sun came out the Wood Whites fluttered about, then settled and stayed still when the clouds cover returned, which made for excellent photo opportunities.
I recently heard of their flight being described as fairy-like, and found this description very apt. It flutters about rather than heading off in a straight path. 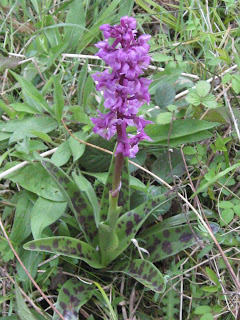 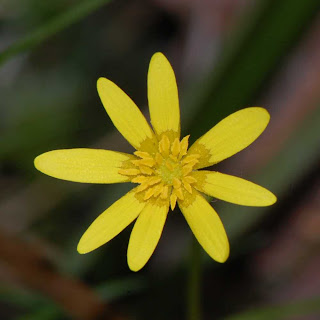 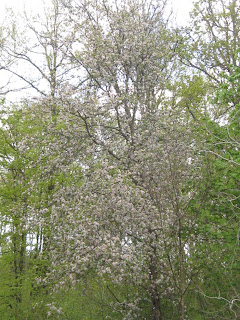 The blossom from this apple tree wafted a delicate scent across the path.
I added this photo to the blog. the following morning  when I  went through all my images trying to figure out if they were males or females. According to the UK Butterfly site, the black spot at the tip of the forewings is greatly reduced in the female. The Learn about Butterflies site states that the male can be recognised by the heavier black markings on the apex of the upperside forewings, and by the prominent white patch on the underside of the antennae clubs.
at 19:32