To  view  a  Slideshow,  click  here  then  choose  Fullscreen  (top  right)
On Monday I completed my Mill Hill transect with the following results: 15 Adonis Blue, 1 Brimstone, 10 Dingy Skipper, 2 Orange-tip, 12 Small Heath, 1 Grizzled Skipper, 1 Green Hairstreak, 1 Red Admiral, 1 White. Adonis and Small Heaths are building fast, I saw many more Dingies after the transect was completed, including aerial combats. I also saw Mother Shipton, Treble-bar and Purple Bar moths. The slope is getting covered by yellow Horseshoe Vetch, an essential food plant of the Chalkhill Blue, Adonis Blue and Dingy Skipper. A Kestrel  hovered overhead.
photo notes: the Green Hairstreak above was shot into the sun so the colour was forced from the Raw file using Lightroom. Shot with Nikon D90, Sigma 180 macro lens unless otherwise stated. 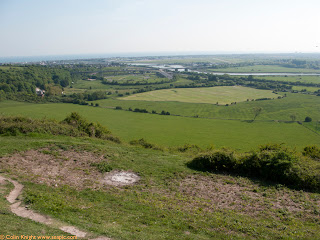 Roman Sestertius, a soldier and a Duke

To  view  a  Slideshow,  click  here  then  choose  Fullscreen  (top  right)
On Sunday morning I attended a club dig, and was pleased to find a Sestertius. This Roman bronze coin is 3cm in diameter and weighs 15.6g. The sestertius (semis-tertius) means "2½", the coin's original value in asses. It is a combination of semis "half" and tertius "third", that is, "the third half" (0½ being the first half and 1½ the second half)". An As or Assarius was an early Roman coin.
I also found two tombac buttons and part of a pewter spoon. I saw two Large Red Damselflies land on a hedge. A fly unwisely did a fly-by and paid the price. In the blink of an eye one of the damsels had it and landed on a leaf to consume its morsel. I saw male and female Brimstones, Whites and two Holly Blues, my first of the season, and a Dance Fly.


I then called in at a Duke of Burgundy site and met Neil with little Mia who acted shy but gave me a wave when they left. Apart from the Duke I saw a Grizzled Skipper, female Orange-tip, Speckled Wood, Drab Looper, Speckled Yellow and Treble Bar moths, plus a Soldier beetle.
photos taken with Nikon D90, Sigma 180mm lens unless otherwise stated.
The front two vestigial legs of this male show well here. The female has six fully functional legs.

To  view  a  Slideshow,  click  here  then  choose  Fullscreen  (top  right)
On Saturday I returned the Muslin Moth moth to the woodland where I found her. She had laid many eggs at home and when I put her on some bracken she soon started climbing down and underneath a leaf. I hope she had more eggs to lay.


I then headed up the track and met George, a retired bee expert. He informed me there were some Grizzled Skippers back along the side of the track. I located four of these and photographed one nectaring on Bugle. There were many dozens of Pearl-bordered Fritillaries flying around and Speckled Yellow moths everywhere.
postscript - I originally mistook this moth for the similar White Ermine.
at 11:30 No comments: