To  view  a  Slideshow,  click  here  then  choose  Fullscreen  (top  right)
On Sunday I attended a dig and three club members found Roman coins, but all I could manage was a  musket ball. I then joined the Sussex Butterfly Conservation social at Knepp Castle Estate. Estate owner Charlie Burrell told us about the Rewilding Project that has been running for 10 years. This fascinating experiment involves changing the land use from intensive arable farming to natural plant growth. Animals are introduced to attempt to replicate the grazing system which existed at the end of the Pleistocene epoch 11,700 years ago. We had a tour of part of the estate and Charlie Burrell explained  what is happening in the project, which should last at least 25 years. Part of the River Adur, which flows through the estate, is being returned to a natural flood plain. The grazing animals introduced include Exmoor ponies, Longhorn cattle, Roe deer which were already present within the deer fence, plus Fallow deer, Red deer and Tamworth pigs. The idea is that these animals look after themselves, establishing their own herd structure and breeding system. Similarly, the plants look after themselves without interference or management: http://www.knepp.co.uk/
Knepp Castle Estate:

To  view  a  Slideshow,  click  here  then  choose  Fullscreen  (top  right)
This afternoon after a frustrating period trying to see my credit card history on-line and being asked questions by someone a million miles away trying to verify that I was who I claimed to be and not an impostor, I decided it was time for some sanity and I drove to the Angmering Woods. I was rewarded by three new species for the year – Orange-tips, a Green-veined White and a Silver-Y moth plus a Red Admiral and a  Comma. Two Blackcaps also made themselves known. Before I left an obliging fifth Orange-tip posed for photos. I then joined Neil's Rewell Wood walk. Bob spotted a Brimstone on the way and a Peacock flew along our path.

To  view  a  Slideshow,  click  here  then  choose  Fullscreen  (top  right)
On Tuesday morning I joined a beach clean-up at Bognor organised by the Marine Conservation Society and sponsored by Marks and Spencers. It lasted 11am-1pm and the 60 or so volunteers collected 40 kilos of rubbish from the beach around the pier area, plus a broken chair. About 20 people were M&S staff and the rest local volunteeers. Refreshments were provided by M&S who do a great job via their Plan A which aims to make them the world’s greenest retailer. They provide excellent support to ButterflyConservation. MCS lead the field in their quest to preserve the UK’s marine life.

Yesterday I did my butterfly transect at Mill Hill and was surprised that the Dingy Skipper was still not out. It is now a month late compared with last year. There were plenty of Peacocks fighting at the bottom of the hill, plus some Small Tortoiseshells and male and female Brimstones and a Comma. A Buzzard circled overhead.

On the way home I visited Ferring Rife where I knew there would be some Tortoiseshell action. I had about 40 sightings along the west bank, including courtship behaviour. The male was behind the female and fluttered his wings constantly. Lesser Celandines were abundant.

In the evening I attended a SusSAR training session where members of the Brighton and Hove area Samaritans told us about their work. The branch has been in existence for 45 years, and the Samaritans for 60 years.
Ferring Rife: 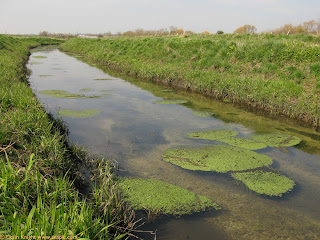 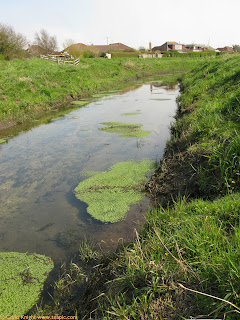 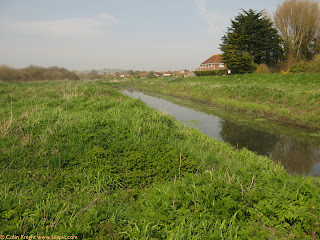 Tortoiseshells, tadpoles and a Willow Warbler


This morning I joined Mark for a trip to Ferring Rife to see the Small Tortoiseshells that Neil reported recently. It was misty early on, cleared up but remained cloudy all day south of the downs. We had about 25 sightings of Small Tortoiseshells and a few Peacocks by the Ferring Rife, some in good condition. However, they were quite skittish and didn’t stop for long anywhere, especially on the green foliage where we like to photograph them. There were tadpoles of various sizes in the ponds. There were plenty of House Sparrows on the brambles and warblers, probably several species. While researching the identity of this warbler I have learnt a major difference between a Willow Warbler and a Chiffchaff - the Willow Warbler has orange/pink legs whereas the Chiffchaff's legs are black/grey. A bonus was seeing a Snipe fly off in front of me.
at 18:38 No comments:

Avocets, Bonelli’s Warbler and a Chaffinch

To  view  a  Slideshow,  click  here  then  choose  Fullscreen  (top  right)
Yesterday I visited Pagham Harbour in the vague hope that the Long-eared Owl was still there. Many others had the same thought! Apparently it was showing well on a tall gorse branch set back from the path by the visitor centre on Sunday and Monday morning, but was less visible when the wind increased Monday afternoon. I enjoyed my wander around the reserve, seeing a Whitethroat and my first red Admiral and Comma of the season. The Comma was in aerial combat with two much larger Peacocks and saw both of them off.  There were plenty of Peacocks (butterfly variety) around. A Chaffinch proclaimed his territory from the top of a gorse tree. I saw my first Avocets since Pensthorpe on the mud flats of the Ferry Pool when I checked the hide.

A birder told me the Bonelli’s Warbler was still at Church Norton so I headed there. It was easy to find as there were a dozen or more borders at the back of the hide. The bird was difficult to see and there were other warblers around, but every so often it showed itself 70 metres away, but never stopped still for more than a few seconds. A Willow Warbler landed near me so I grabbed a shot.
This Redshank kept bobbing up and down and pursued another nearby, which then flew off.