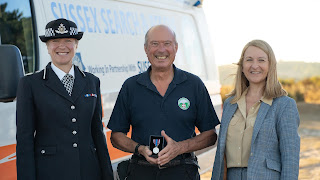 Last Thursday I attended a Sussex Search & Rescue training session in Ashdown Forest. Part of the evening was devoted to a presentation of the Queen's Platinum Jubilee Medal to 28 members who have completed 5 years of voluntary service to the team. The medals were presented by Sussex Chief Constable Jo Shiner and Sussex Police and Crime Commissioner Katy Bourne.

to view a gallery with more photos, click here
Yesterday afternoon I visited Arundel WWT. I hoped to see a Small China-mark moth which I have only seen once before on the reed bed walk. This time I photographed two, one at each end of the walkway. They are only visible when flying and can only be photographed when they land on a reed right by the walkway.

I visited Petersfield Heath on Monday, the first time I have walked around this nature reserve. I enjoyed the variety of habitats: woodland, some patches of heath among the grassland and the lakeside. The wildfowl had young: Canada Geese, Egyptian Geese and Mallards. I found a Dingy Flat-body moth larva on Hemlock Water-dropwort by the lake. A Small Tortoiseshell landed on brambles and a Small Tortoiseshell pupa hung from a heath stem. A Painted Lady flew by in a hurry, Large Skippers appeared and Meadow Browns fluttered everywhere in the grassland. Speckled Woods landed on bracken in the woodland areas. Other moths seen: Nettle-tap, Garden Grass-veneer and a Straw Dot. A Dusky Cockroach showed itself. 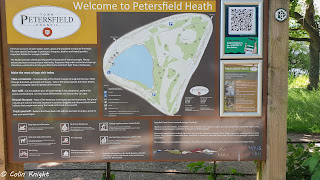 to view a gallery  with more photos, click here

On Sunday I visited Stedham and Iping Commons to see the Silver-studded Blues and find some moths. The SSBs were seen in both commons but all were males until I found one female on Iping Common. I was told that mating pairs were seen early in the morning. On the moth front I saw  Clouded Buffs, Common Heaths, Common Waves, Peacocks, an Inlaid Grass-veneer, a Four-dotted Footman and a Marbled White Spot. 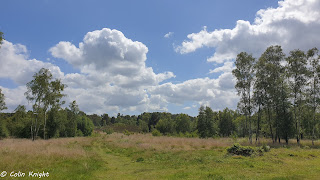