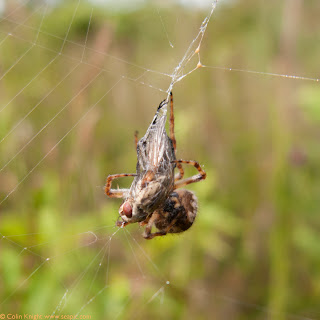 Voles, Terns and a Shrew

To  view  a  Slideshow,  click  here  then  choose  Fullscreen  (top  right)
On Monday afternoon I visited Arundel WWT and was delighted to witness several interesting wildlife behaviours. I observed the first one from the footbridge over the pond outside the entrance. The Moorhens have produced a second brood just a few days old. A first brood chick fed two of the second brood chicks.
I saw two Water Voles in the reserve. The first swam from the far end of a pond, under the footbridge I was standing on (when it was too close for my lens to focus), then exited from the opposite end of the pond. The second was out of the water before I could take a photo. I spotted a Common Shrew enjoying the spoils underneath a bird feeder. A Wren boldly flew onto a fence post and preened itself for a few minutes. A Sedge Warbler sang his heart out from the top of a tree, then flew up and around and came back to the same tree top. It repeated this feat, then flew off and sang from a nearby tree. The Black-necked Swans have a family of fluffy white cygnets.


The Sand Martin hide had two Common Tern chicks on the nesting platform and Black-headed Gull chicks provided more entertainment nearby. A pair of Canada Geese had 11 grown-up goslings grazing nearby.