to view a slideshow click here, then choose Fullscreen (top right)
Yesterday the sky was clear so I headed to Mill Hill to do my weekly butterfly transect. The bottom of the hill was covered in Adonis Blues and Meadow Browns. I saw a Green Woodpecker for the first time at this site. The hill will be closed to visiting traffic for the next two days because of the Shoreham Air Show. My count was 74 Adonis Blue, 9 Chalkhill Blue, 1 Common Blue, 16 Gatekeeper, 68 Meadow Brown, 17 Small Heath.
The second brood Adonis Blue have peaked this week, the bottom of the hill is covered in them.

I then hastened to Steyning Rifle Range as it was the first sunny day since the large number of Brown Hairstreaks seen there on Monday. As I descended the hill I saw a crowd of butterfly enthusiasts, at least a dozen people, mostly photographers. Although plenty of BHs were spotted, they were all in poor condition, either torn or had lost plenty of scales and so looked tatty on the upper wings. Half a dozen lenses pointing at one specimen does not make for creative or satisfying photography so I wandered off to try to find my own specimens, without success. I also found a lizard, two slow-worms and a snake skin. 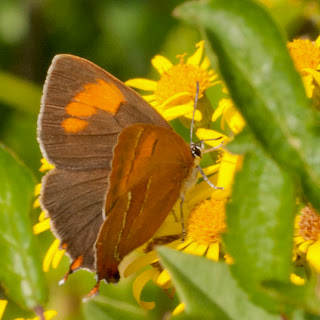 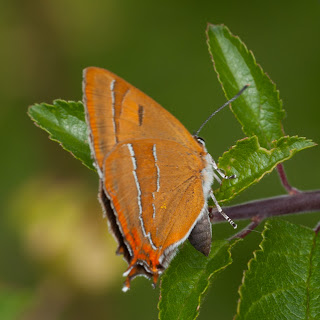 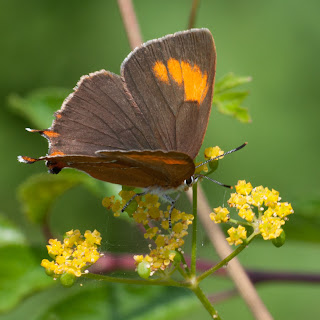 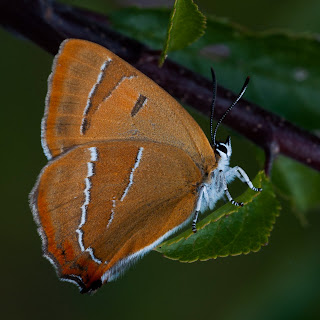 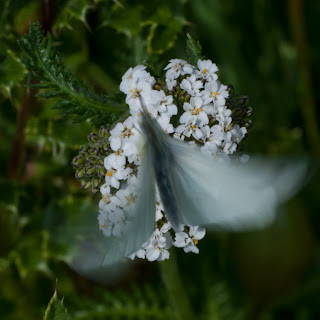 I have ‘stitched up’ some of the BH images using Photoshop Elements 9, which was fun. It took me back to my darkroom days when creative photography was partly done in-camera and partly done in the darkroom. The truth is that no photograph is truly representative of what we see. The eye and brain do things that photography cannot replicate, and the camera itself manipulates what is captured according to the settings or program we choose. Some photographers now do post editing work in-camera. I can understand photographers who will only use an image as captured, perhaps with minor editing. The vast majority of mine are in that category, and major photo competitions do not allow major Photoshop manipulation, which is time consuming. However, it is satisfying occasionally to transform an ugly duckling into a beautiful swan! (I think ducklings are beautiful too :)  I manipulated the Lizard and Green-veined white also. You can view the before and after images in the slideshow.
at 09:12