To  view  a  Slideshow,  click  here  then  choose  Fullscreen  (top  right)
On Wednesday morning I returned to the roosting Orange-tips to take more photos. They were exactly where I  left them on Tuesday afternoon and this time I had my tripod and tried various photographic techniques including flash. I informed Mark that they were still in situ and he was able to join in the fun. At 11:30 the one of the butterflies cleaned its face, opened its wings 15 seconds later it flew off. The other one stayed put for another 30 minutes before it flew off. It immediately headed for my tripod which has an id tag with  light and dark blue areas. It fluttered around the tag for sometime on two occasions before flying away. We had noticed that the Orange-tips were favouring the blue/violet flowers, and nectared mainly on Bluebells and Wood violets, and mostly ignored the abundant white Wood anemones. I also caught them on Ground ivy once and Wood anemones twice, but never on yellow Celandines. One also headed for a drinks can which had a blue colour. They showed a definite preference for flowers at the blue end of the spectrum. 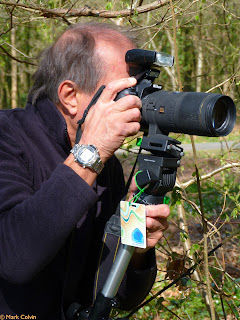 Mark took some shots of me in action! 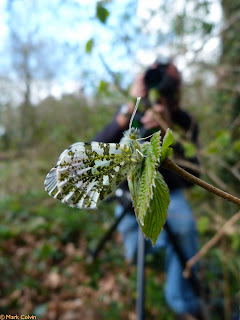