Adders and Grizzlies at Mill Hill

To  view  a  Slideshow,  click  here  then  choose  Fullscreen  (top  right)
I did my weekly butterfly transect at Mill Hill this morning. It was sunny with a cold wind, so I was not surprised at the absence of butterflies. They started flying when it had warmed up at the bottom of the hill. The exciting subjects today were the adders. I first saw a black female, then a brown female, then a grey male followed by a black male. The last black male moved towards the brown female which was basking in the sun. They met and the rest is history! after 30 minutes observing them I moved on and photographed Grizzled Skippers. I saw a few Dingy Skippers, but no photos. I finally saw the Small Heath that Joaquim reported on Friday plus a male Brimstone. Later I witnessed the grey and black male adders doing their dominance dance. 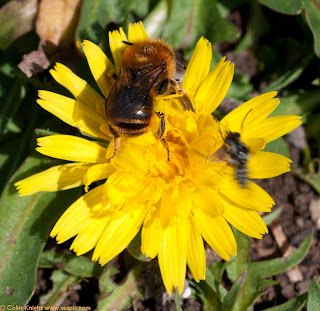