To  view  a  Slideshow,  click  here  then  choose  Fullscreen  (top  right)
Yesterday morning I met Mark at Church Norton, near Selsey, next to Pagham Harbour Nature Reserve. We explored St. Wilfrid’s churchyard and the beach hoping for interesting butterflies and birds. We just missed a heavy shower and at midday we found 9 Red admirals on one ivy ‘tree’ which was buzzing with insects. Some strange fungi were prevalent among the gravestones. Beside the churchyard is a stand of oaks of a species I have never seen before. I think they are Chinese Evergreen Oaks, Quercus myrsinifolia. It would be interesting to know how they came to be here as this species is  a rare import. There were many Large Whites fluttering around them. At the top of the beach I found 2 Speckled Woods and we saw many more Red Admirals, some coming from the surf line, which is strange as most RAs beside the sea are seen heading out over the channel.
St. Wilfred’s Chapel has an interesting history. The original church of St. Peter’s was built in the 13th Century and in 1866 half of it was moved to Selsey leaving the chancel behind which was rededicated to St Wilfrid, the 7th Century founder of Selsey cathedral which has long gone. This small chapel is a simple Grade 1 listed building in Early English Gothic style with beautiful 20th century windows celebrating its history and the natural history of Pagham Harbour (above). It is lovingly maintained by local people and restoration assistance from the Churches Conservation Trust. 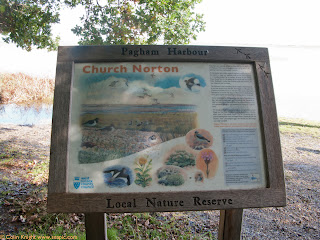 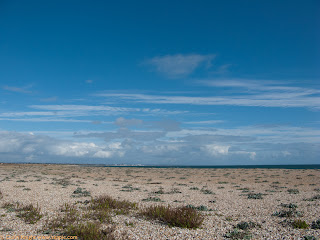 Eddi's Service is a poem by Rudyard Kipling, part of his historical fantasy book "Rewards and Fairies" published in 1910. Eddi was a priest of St. Wilfrid who holds a midnight service and only a donkey and a bullock come, so he preaches to them.

The altar-lamps were lighted, - an old marsh-donkey came,
Bold as a guest invited, and stared at the guttering flame.
The storm beat on at the windows, the water splashed on the floor,
And a wet, yoke-weary bullock pushed in through the open door.
“How do I know what is greatest, How do I know what is least?
That is My Father’s business,” said Eddi, Wilfrid’s priest.

“But - three are gathered together - listen to me and attend.
I bring good news, my brethren!” said Eddi of Manhood End.
And he told the Ox of a Manger and a Stall in Bethlehem,
And he spoke to the Ass of a Rider, that rode to Jerusalem.

They steamed and dripped in the chancel, they listened and never stirred,
While, just as though they were Bishops, Eddi preached them The Word,
Till the gale blew off on the marshes and the windows showed the day,
And the Ox and the Ass together wheeled and clattered away.
And when the Saxons mocked him, said Eddi of Manhood End,
“I dare not shut His chapel on such as care to attend.”


The great east window was commissioned in 1918 by Maurice Wingfield and depicts three main characters – his brother John Wingfield who died in the First World War, his sister-in-law Stephanie Agnes who died in 1918, and Thomas Agar-Roberts (a friend of John) who also died during the Great War.
On the left John is depicted in full medieval golden armour as the archangel St Michael; the mauve feathers of the wings can be seen. Stephanie Agnes appears in the centre light with a lamb.‘Agnus Dei’, the Latin for ‘lamb of God’, constitutes an alliterative reference to her name in depicting her as St Agnes. The third light shows Thomas, also in full medieval armour, as St George with the lanced dragon athis feet. Above the true likenesses of the individuals is a representation of St Wilfrid, holding a depiction of his church at Selsey, on the left and King Ethelwald (Æthelwealh), who gave Wilfrid the land for the church, on the right. The window was produced by Heaton, Butler and Bayne.