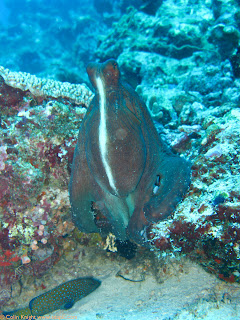 This  morning’s dive at Lankan Reef was fun. We saw two mantas at different times cruising along the reef, which is their behaviour when there is not much current. I also saw a wonderful octopus who stood proud from the rock he should have been hunkering down under. He allowed everyone to get close and photograph him. My first turtle of the trip appeared in mid water – a small one heading for the surface.
The Giant Triton is the only enemy of the Crown of Thorns starfish which feeds on and and destroys large areas of the Great Barrier Reef.

A swift current was running along the reef, so the best place was next to the reef and in the caves.  I saw the first mantis shrimp of the trip. As soon as he saw me he headed for a hole.

These fish live in huge shoals at the mouth of overhangs and caves.

Butterfly reports have been coming in since I arrived. Bill saw two different patterned large ones by the dive shop yesterday, Abdullah saw a similar black and white spotted one by Adel’s villa. On the boat this afternoon our divemaster reported another near the dive shop. No sign of the Small Cupids I photographed in 2010 and saw last year.
(testtext)
at 16:55