Henry’s groat and a peacock


This morning we had a club dig on good rolled land in perfect conditions. I had a slow start, finding just a couple of thimbles, parts of crotal bells, buttons and a very worn George III halfpenny dated ni the 1770s while others were finding hammered coins. I had a break to rest my aching back, then started again and six  hours after starting I found my coin – a lovely Henry groat. I don’t know yet if it is Henry IV (1399-1413), V (1413- 22) or VI  (1422- 61 & 1470-71).
Diameter = 24.45mm, thickness = 0.95mm, weight = 3.77g
A groat  equaled 4d (4 pence old money, one third of a shilling or 1/60th of a pound) and was probably worth about £50 in today's money and equal to a week's wages according to various sources.
While detecting by a verge a butterfly fluttered overhead and landed. I was delighted to recognise a Peacock, which has been a rarity this year. I had my Lumix in my backpack so was able to take some shots. I also saw 4 Red Admirals and a White of unknown provenance.
Obverse Legend: HENRIC DI GRA REX ANGLIE Z FRANC
meaning Henry by the Grace of God King of England and France 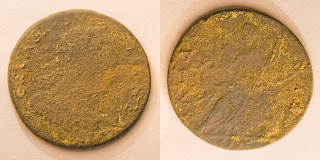