To  view  a  Slideshow,  click  here  then  choose  Fullscreen  (top  right)
Yesterday I visited Southwater Woods and was fortunate to see a Purple Hairstreak on the oak canopy where we had seen four the week before. There were also Gatekeepers, Ringlets, Meadow Browns, Large Whites and a Roe Deer. I ended up at the master oak by Trout Lane at 3pm where I found Neil Hulme craning his neck. After a few minutes he exclaimed "there's one". He saw it high on the edge of the canopy a few times before  I claimed a sighting. He declared it to be a pristine male Purple Emperor. It was soon joined by another male and fisticuffs ensued. Then the resident male was joined by another individual, but there was no aerial battle. They snuggled up high up behind the leaves, and we could just see wing shimmering that indicated courtship on the part of the male. However, she was having none of it and flew off after a few minutes "A previously mated female" declared Neil. After a while another male appeared and the aerial battle spiralled above the canopy of the ash where all the action was taking place. I left at 4pm, very satisfied with an outing that had produced 3 Sussex Emperors. 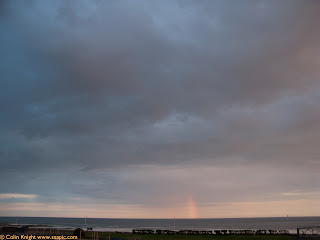