Audience with a Purple Emperor


This morning at 9:30 I met Mark at the Alice Holt Forest Straits Enclosure, feeling that this was my best chance of an encounter with a Purple Emperor on the ground. I was delighted when one appeared, although the male had damage to one wing tip. Mark sprayed evil smelling liquid on the ground and this attracted the butterfly away from the unattractive alternative that a dog had left behind. We were joined by three other butterfly enthusiasts. There were many Silver-washed Fritillaries, some Ringlets, Speckled Woods and White Admirals. 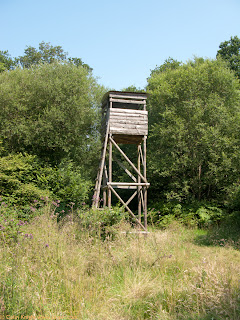