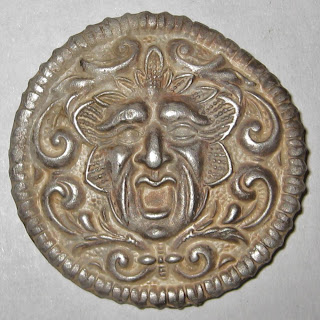 Yesterday morning we had a club dig near Ashurst on pasture on a cold, dry day. 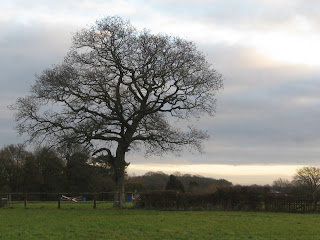 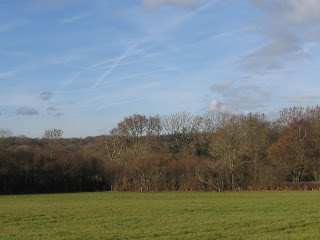 It warmed up later
Six of us turned out and we quickly determined that the fields were pretty noiseless. Rifle cartridges and mortars showed up and Gill found a nice buckle.
I found two interesting items. The first was a school attendance medal. 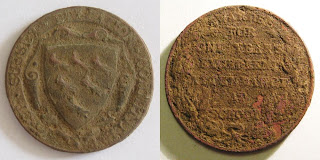 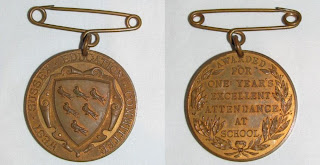 I found this identical medal on ebay showing the pin used to attach the medal
note: I revised this post on Jan 4 after using ultrasound and brushing to clean the medal.
On one side is a shield containing six Martlets with 'WEST SUSSEX EDUCATION COMMITTEE’ round the edge, on the other side the words ‘AWARDED FOR ONE YEARS  EXCELLENT ATTENDANCE AT SCHOOL’ Martlets were stylised birds without feet, based on the house martin. The Sussex Shield before 1889 consisted of six martlets. After that date the two administrative counties East and West Sussex were created each with its own coat of arms. So the medal was produced after 1889.
The medal weighs 28g, with 40.7mm diameter and 3.45mm thickness.

Sue gave me a short story by Saki (1870-1916) in which a child's good conduct medals play a central part. It can be read here: The Story Teller'.
This is a link to a family site with photos of Good Conduct medals for around 1908-10. 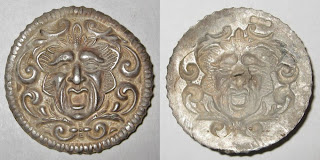 The other item was found near the gate just before I packed up. It is a silver green man. On the reverse are the marks for Birmingham (anchor), Sterling silver (lion) and date letter ‘a’ in the shape for 2000. In the middle is a solder mark where it was attached to something. 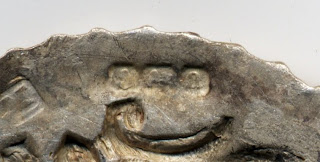