Yesterday I attended a local Sussex Metal Detecting Club dig hoping to continue my run of luck (I had found 5 old coins, including 3 silver hammered on Thursday and Saturday on MWS digs). The field I was mainly searching had tough stubble of various heights which can be quite hard going with my light Deus detector. By lunch time I had only found a few unexciting copper artefacts and a two pence piece. Sue's packed lunch and a flask of tea refreshed me for the afternoon and the weather was very pleasant- cloud cover with a few sun bursts. Val found a quarter stater which was exciting, she has a history of finding these coins. There were reports of quite a few hammered and Roman coins coming up. My pals Jim and Stuart, from our small club (SHSS), were also lacking good finds. I decided to change detectors to my old Minelab SE. for the last 2 hours. It's rather heavy, which is why I bought (and love) the Deus. However, it has a history finding good things for me, so I determined to plod on till the dig ended at 4pm. The weight of the old Minelab takes a bit of getting used to after the lightness of the Deus and I felt some shoulder ache. It made 'stubble bashing' easier and 15 minutes before the dig ended (4pm) I decided to check out an area free of stubble. At 3:50 I heard the lovely tone that the Minelab gives when it has detected something interesting, which usually turns out to be lead, silver paper or ring pulls. This time it was different. As a checked the clod of soil I had dug out I saw IT!  I was so excited I forgot the take a 'clod photo'. I was in the shade and when I cleaned it, the coin looked silver so I thought it was silver stater. I phoned Jim and Stuart to come over and they checked it out, all socially distanced from one another of course. Val saw the gathering and came over to see what the fuss was about and looked at it in the sunlight and pronounced it as gold! This was clear in good light. Jim took some photos of me grinning as I held it. I had done the same for him previously when he found a gold stater. 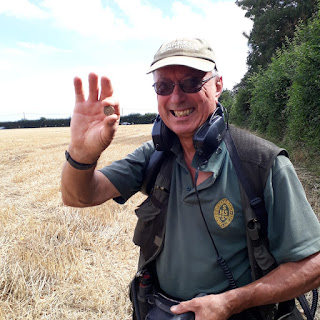 Then we walked back to the cars and called to the dig organisers, Danny and Aedan, and I did the ridiculous 'gold dance' so they knew what had been found before I arrived. The few people left also had a look - nothing like handling something like this rather than just seeing a photo later. I put my finds box on the ground and stood back while people came forward to see it. Plenty of hand washing afterwards.
What had I found, apart from it being a gold stater? As this was my first stater, I hadn't a clue! Danny told me what is was. However by the time I got home I had forgotten what he had said. I then researched the southern Celtic tribes and soon found a match and posted photos then various club members and Danny also gave me the id - Spinks 21. 'Coins of England & the United Kingdom, The Standard Catalogue of British Coins' published annually by Spink is the coin bible. Coin no 21 is described as 'British A. Westerham type. Devolved Apollo head r. R. Disjointed horse 1. large pellet below'. Coin 366 is similar, but silver and is attributed to the Durotriges tribe which occupied W.Hants, Dorset, parts of Somerset & Wilts.
The coin shows abstract representations of the head of Apollo on one side and a horse on the other side.
A similar coin is described in this post:  https://archaicwonder.tumblr.com/post/55796704143/pre-roman-white-gold-stater-of-the-durotriges :- Circa 65 BC - 45
Obverse:  Abstract head of Apollo facing right with a wreath.
Reverse:  Disjointed horse facing left, the tail has three strands pointing up, a pellet              below horse, a small elliptical pellet above horse and a coffee bean above the tail.

The coin is 21mm maximum diameter and weighs 6.1g.

This document covers the period and evolution of the coinage, and shows a coin like mine:
https://www.celticcoins.com/wp-content/uploads/2015/01/Brit_First_Coins.pdf

https://vanarsdellcelticcoinageofbritain.com/plates-catalog-listings_ccb3/plate_51_ccb3.html
https://vanarsdellcelticcoinageofbritain.com/history_ccb3/earliest_struck_coinage_1_ccb3.html
There is debate about whether this type of gold stater is attributable to the Belgae or Durotriges tribes. After reading the various literature I am siding with Durotriges.

The coins designs came from the continent via Greece, Rome and the Gallic tribes. The design has become simplified during this process presumably as the western tribes learnt to handle eastern metallurgical techniques.
I have added the coin to the PAS database (https://finds.org.uk/)
I will add to this post if new information comes to light.
at 16:50