Yesterday I visited Collard Hill, Street, , to see the Large Blue butterfly. The round trip took 5½ hours and I spent 3 hours on site. The Large Blue is a reintroduction success story which is detailed in Patrick Barkham’s excellent book, The Butterfly Isles (see foot of page).
The National Trust run this SSSI site. There is parking by the Street Youth Hostel. An information board tells you to follow the blue posts which lead across a main road to the reserve. The site is covered by ant hills. The ants play an important part of the life cycle of the Large Blue, as they do with other blues. The ants are tricked into looking after the larva which remains underground during the day and comes out to feed at night. It escorts the newly emerged adult from the nest to the surface and attends it while it dries out.
This NT video gives the Large Blue story:


Large Blue Butterfly at Collard Hill from National Trust on Vimeo.
I passed on the way, and heavy rain on the journey made me wonder if I had made a good decision. When I arrived it was dry with cloud cover and good light conditions. However a strong wind made me wonder if I would see any butterflies. I met two other enthusiasts from the who had already photographed Large Blues. Then I saw my first. It was a chalky blue colour in flight, quite different from the worn Adonis Blue I saw, and the Common Blues which were around. I was advised this Adonis must be an introduction, thoguh I saw quite a bit of Horseshoe Vetch, its foodplant. The Local site watchers pointed out a nice female at rest, and I managed some open wing photos. Later I found another female and got my best open wing shots. I reckon I had 15-20 sightings during my time there, and the NT blog for the day indicates 9 specimens were flying.
I also saw my first Marbled White of the year, two sightings. On the way to the hill I came across a young vole which I think is a Field/Short-tailed vole, Microtus agrestis based on its tail length. It was much smaller than the the adults I have seen, and behaved like an unworldly teenager. After I released it, it poked around in the grass and cleaned its face.
There were plenty of Common Orchids in the first meadow I came to, and Pyramidal Orchids on the hill. The views from the hill were fantastic. 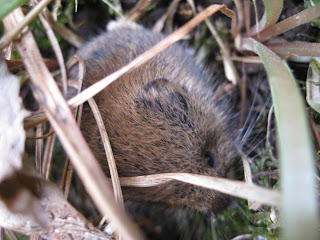 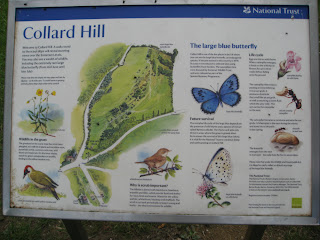 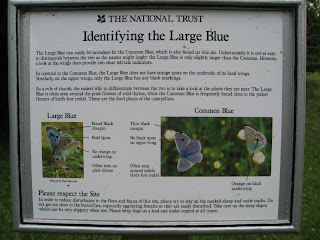 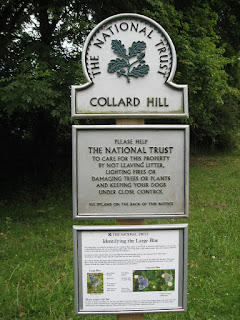 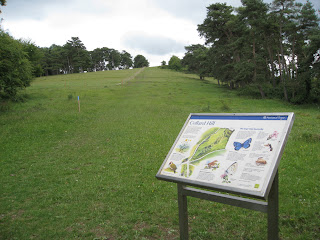 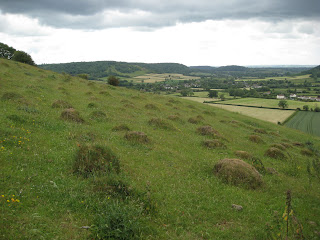 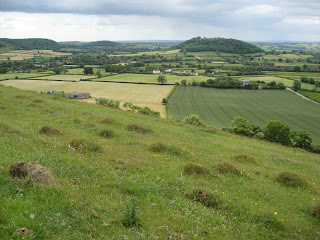 All butterflies are Large Blues unless otherwise stated 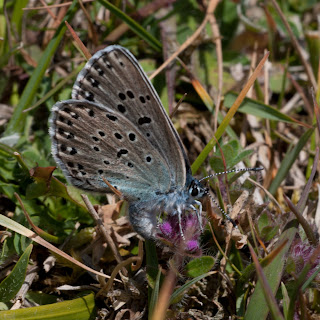 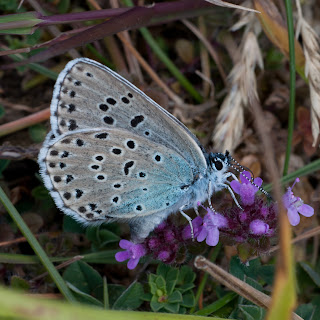 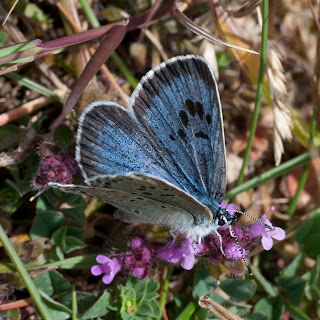 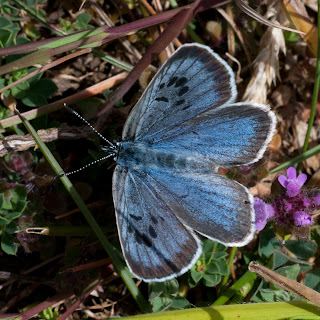 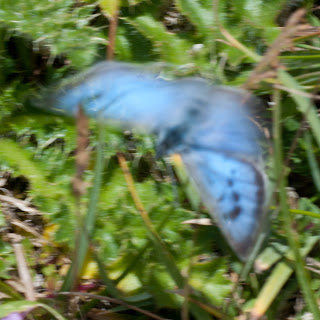 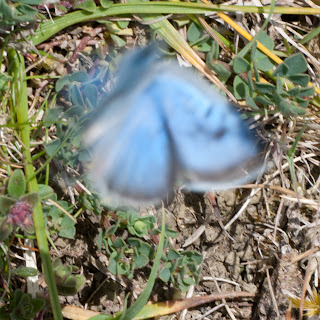 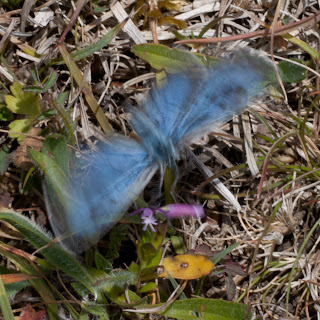 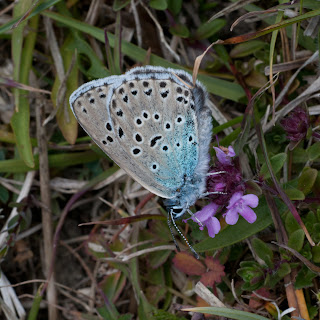 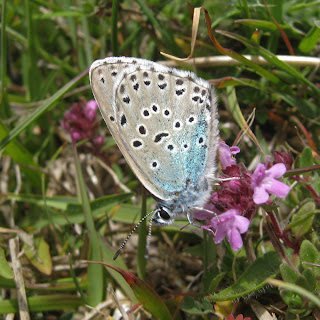 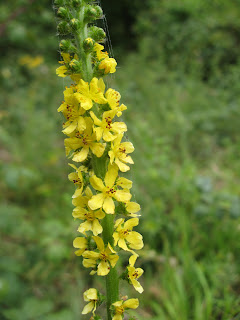 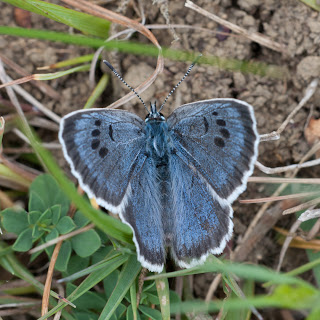 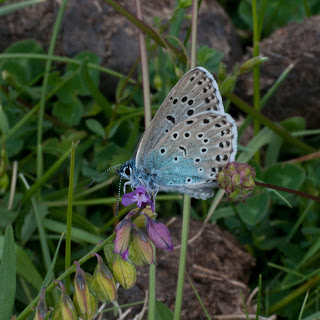 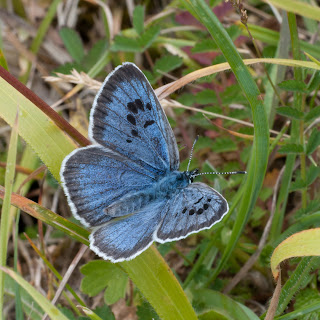 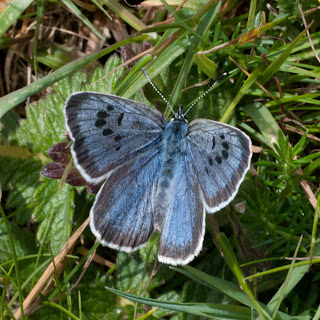 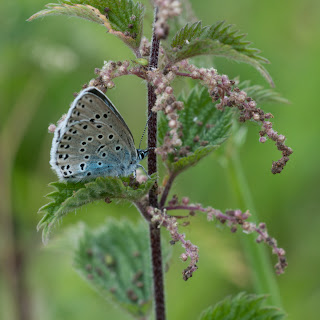 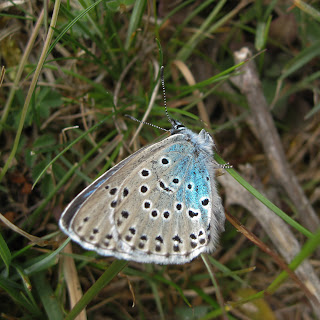 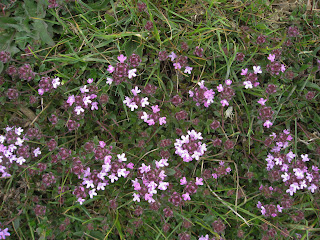 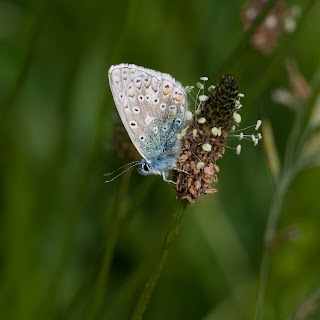