Elizabeth I, William III and a Crotal Bell 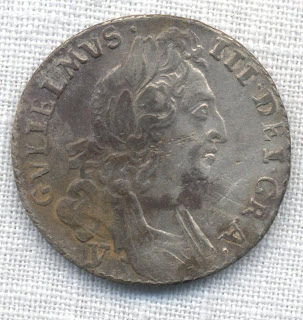 William   sixpence dated 1696
This was my best detecting day with just a handful of club members turning out on another glorious day in mid . 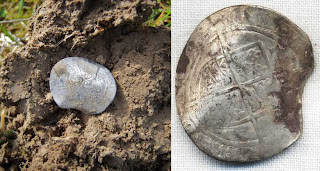 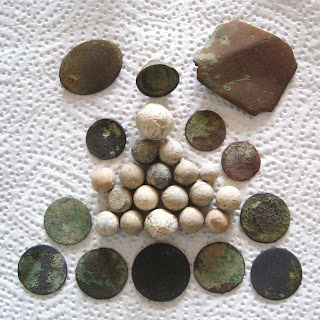 a crotal bell which is another first, a thimble, 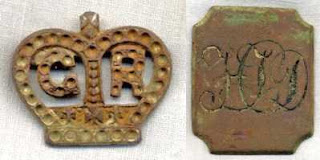 and 3 harness mounts, one with scrolled initials HCD worked into a fancy design.
Also a plated 20thcentury George Rex broach minus pin and sparklies. The crotal bell has its dinger inside and makes an excellent noise.

Other finds were a 20thc general service military button with on the reverse. 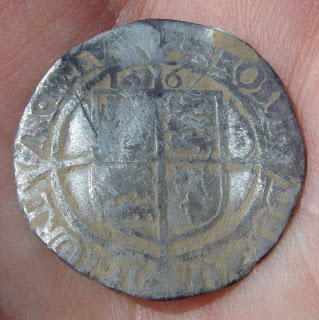 Ray found his first ever hammered, this Elizabeth I 1567 sixpence, (above) and Kevin  found one also, so smiles all round. 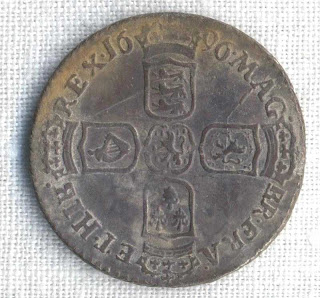 Finally when everyone else had disappeared my second great coin came out, a perfect William   sixpence dated 1696 (above) 2.94gm, 21 mm. It is an early milled coin. This was the start of the Great Recoinage as the decision was made to remove all the old hammered coins from circulation. The head side has the Y (York) mint mark at the bottom.
The words on the coin are:
Obverse: GULIELMUS III DEI GRA (William III by the Grace of God)
Reverse: MAG BR FRA ET HIB REX (King of Great Britain, France and Ireland)

An Orange Tip flew by at the end of the day. They were probably there before, but I was focused on the ground most of the time... With yesterday's adder and Skippers, this has been an exceptional weekend.
at 22:05