Brownies and a tragedy

to view a gallery with more photos, click here
I have been visiting the prime Brown Hairstreak site at Steyning daily and on Friday they were falling out of the trees and laying eggs on the prunus. I saw 4 females and there were at least 2 more seen by other people. On the way down the path I found James photographing a male BH which was nectaring on brambles high up on top of a prunus hedge. This is only the second time I have seen a male.
Yesterday it was very hot, and the BHs did not tumble out as before and I did not see any, though some were observed by others. I spotted a dead female Stag Beetle on a dock leaf as we walked off the hill which looked like it was placed there. Richard reported 7 Brown Hairstreaks at another site which Mark and I checked out later with no success.
On the way home I heard on the radio about the tragedy when a jet crashed onto the A27 at the nearby Shoreham Air Show. People were driving along and wiped out in an instant. These aerial acrobatics should be banned.
Today it is raining hard so I will be forced to watch the second part of day 2 of the Bejing World Athletics Championships live :) - Mo Farah was supreme yesterday and Jess Ennis-Hill is looking good.
Steyning Coombe August 20:
Steyning August 21: 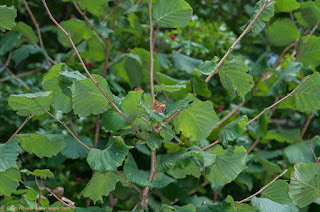 Speckled Woods are one of the butterflies that react to the pre-flash and instantly takes off before the actual flash. This is one of those cases.