Adonis, Wall and a Fire bug

to view a gallery with more photos, click here
Yesterday I did my Mill Hill transect on a warm but cloud covered morning, which accounted for the low numbers of everything except Walls. It was wonderful to see the brilliant colour of second brood Adonis Blues. Later the sun shone through and the butterflies rose up in numbers. Results: Adonis Blue 3, Chalkhill Blue 13, Common Blue, Essex Skipper, Gatekeeper 6, Meadow Brown 20, Peacock, Red Admiral, Small Heath, Small White, Wall Brown 8. Afterwards I stopped at Beeding cement works where there were plenty of Common Blues, Brown Argus and a Holly Blue. Finally I visited Steyning Downland Scheme and thought I saw a Brown Hairstreak heading over the prunus towards the canopy. There were plenty of Walls and Holly Blues on the brambles at the top of the hill.
Mill Hill: 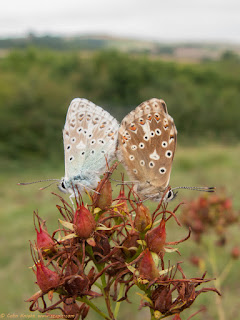 Some of the second brood P. despicata are tiny and there are several pattern forms among them.