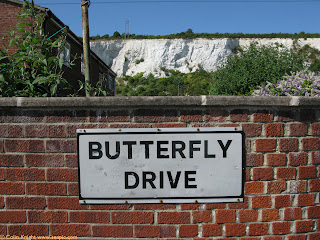 To  view  a  Slideshow,  click  here  then  choose  Fullscreen  (top  right)
On Friday Sussex "Wood Whites" team raced Hampshire’s "Glanville Fritillaries" in the Big Butterfly Race. My Sussex team toured Hampshire and Hampshire toured West Sussex. Points were scored for each species spotted – two points for an egg, larva or pupa or one point for an adult. The CEOs of Sussex Wildlife Trust (Tony Whitehead) and Hampshire & Isle of Wight Wildlife Trust (Debbie Tann) were the adjudicators.

Patrick had a pre-race article in the Guardian:
http://www.guardian.co.uk/environment/2013/jul/18/butterfly-survey-uk-summer

After a brilliant day and performances by both teams, the results were announced live on BBC South from Bosham harbour - we had no idea of the result until that time.
Alexis Green of the BBC travelled with the "Glanville Fritillaries" team and hosted the announcement of the winners before she presented the weather forecast on BBC South.

It was a tight contest - 34 points each - but Wood Whites spotted 28 species to Glanville Fritillaries 26 so our Team Leader, Nick Baker, was crowned King of Butterflies!

Our adjudicator, Debbie Tann, wrote an excellent account of the day:
http://ceohiwwt.wordpress.com/2013/07/20/butterfly-madness/

Patrick published two reports in the Guardian after the race:
http://www.guardian.co.uk/environment/2013/jul/18/butterfly-survey-uk-summer

The purpose of the event (apart from giving us a great day out!) was to publicise Butterfly Conservation's “Big butterfly Count” which started Friday and runs for 3 weeks:


All you need to do is spend 15 minutes in your garden or another butterfly friendly place and record how many butterflies and moths of the species on the chart that you see.
id chart: http://c1292668.r68.cf3.rackcdn.com/ID-Guide.pdf
You can repeat this count as many times as you like and enter the results on-line.

A few of the butterflies that contributed to our victory:
at 21:37