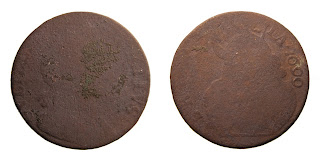 We had a club dig yesterday. It was cold but not frosty like Saturday and I was glad to have my hat with ear flaps. The pasture was easy to dig and lots of bullets, and cartridge cases came up. Nothing exciting was found. I had a William III halfpenny dated 1699, the second I have found. The date is part of the legend around the border instead of being in the exergue (the space on a coin beneath the main design) which makes this a second issue coin.
The obverse legend is GVLIELMVS TERTIVS (Latin for Willam third). blue indicates the letters are visible on the coin.
The reverse legend is BRITANNIA 1699

Here is an image of the same coin in good condition:

I also found some large plain buckles, 2 Victorian pennies (186? and 1906), a mineralised hammered coin, part of a star shaped copper ornament, probably from a harness, a harness mount with scroll initials and an ornate part of a buckle, 5 buttons and some musket balls both whole and flattened. 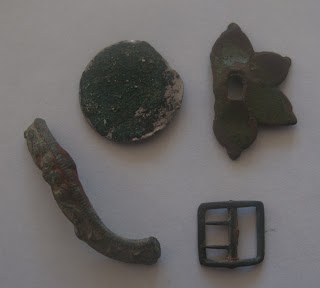