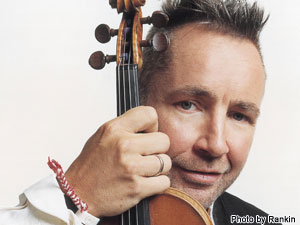 We went to Brighton Dome last night with Jackie to see the last concert of Nigel Kennedy's  current tour. Bea and Brian saw him in the 80s and thought him fantastic. We agree!  He has played all over the country this month. With his orchestra he played an eclectic range of music including jazz and rock. His new interpretation of The Four Season was brilliant, as was his new piece Four Elements of which he played ‘Erf’ and Water. Many of the musicians were Polish – he lives in Kraków. The four singers and violinists included beautiful young ladies who he made a great fuss over, especially Lizzie Ball. His style was entirely informal as expected and he wore a punk outfit for the first half. It was obvious he enjoys a wonderful relationship with the members of the orchestra as everyone seemed to be enjoying themselves and this came over in the music. They had obviously played together a lot and the most anarchic sounding pieces had an underlying sense of unity. One moment we were all tapping our feet and the next there was silence as he started another beautiful violin solo. The changes in pace added a lot to our enjoyment of the evening. There were standing ovations and multiple encores. We agreed that this was one of the most enjoyable musical evenings we have ever experienced. We are now looking at booking for Croydon in May when he plays Brahms with the London Philharmonic Orchestra.
Nigel Kennedy is a Brighton lad who comes from a long line of musicians and was a child prodigy taught by  Yehudi Menuhin. He has followed his own counsel and is very articulate and outspoken about the music industry:
http://www.guardian.co.uk/music/2011/aug/13/nigel-kennedy-violinists-bach


This is the blurb on the net about this tour:
‘Following the staggering success of his UK performances of Vivaldi’s Four Seasons last season, including a stunning, sold out show at London’s Royal Albert Hall, Nigel Kennedy is soon to be touring the UK in January, again performing his exhilarating and unique take on Vivaldi’s Four Seasons as well as his own brand new composition, the Four Elements.
This marks the world premiere of the Four Elements. Composed for the Orchestra of Life and voices, the Four Elements is a highly descriptive composition, inspired by the elements of earth, water, air and fire, which takes the listener on a journey of exhilaration, contemplation and celebration.
For over twenty-five years, Nigel Kennedy has been acknowledged as one of the world's leading violin virtuosos and is, without doubt, one of the most important violinists Britain has ever produced. His virtuoso technique, unique talent and mass appeal have brought fresh perspectives to both the classical and contemporary repertoire. He is the best selling classical violinist of all time.
Kennedy released his first Studio album via Sony in September 2011, his own brand new original composition ‘Four Elements’, which he will be performing in full as part of his show.
Nigel says "I couldn’t be happier to be bringing my new orchestra back to the UK for these dates with the Four Seasons and my new work - they are brilliant young players at the top of their form. It’s great to include my band members to the Orchestra of Life. For the Four Seasons, we have also brought in Massive Attack’s percussionist, Damon Reece – I am very excited by this new approach to the Seasons!" ‘
at 12:18