Mary's groat in a field with fungi

We have central heating again and it is pleasant to have the chill taken off these colder evenings. After 14 years particles in the system had clogged the valve which allows the water to flow into the heating system. The problem was fixed at the same time as our annual service.
On Sunday I attended a club dig. The rain soaked us initially but it stopped after an hour and was replaced by a cold wind.  I was very pleased to find a Mary 1 groat (1553/4) in good condition (photo above), my third hammered coin, the last being an Elizabeth half groat in May 2010.
This is a better photo of a Mary 1 groat from 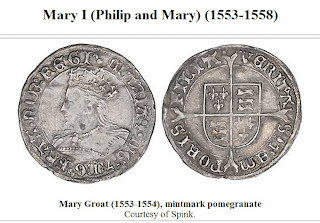 This is a short account of Mary 1 (Bloody Mary) on the PAS database: http://finds.org.uk/postmedievalcoins/rulers/ruler/id/220/name/mary-i-of-england
A fuller account can be read here: http://www.englishmonarchs.co.uk/tudor_8.htm

The London mint mark is a pomegranate found between MARIA and DG on the right side.

My other finds included an 1862 Victoria halfpenny and a George III halfpenny with the monarch's head just visible in outline. It may be an Imitation halfpenny, or ’evasion’, depicting a bust resembling George III, but with a false legend. Towards the end of the 18th century, a large proportion of the copper coinage in circulation was unofficial or counterfeit. To avoid severe penalties for forgery, the manufacturers of these 'coins' made use of false legends. This information is from: http://www.ukdfd.co.uk/ukdfddata/showrecords.php?product=27008&cat=86
Other good  finds by club members were a Celtic coin, 3 Roman, another hammered, a cut half and a cut quarter.
Bob showed me some interesting fungi, unidentified as yet: 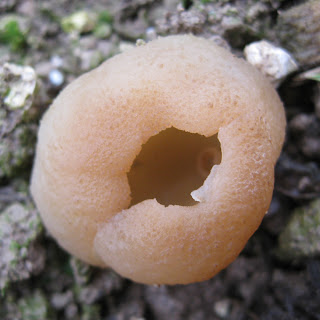 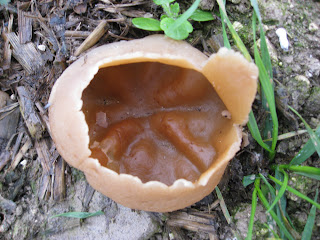 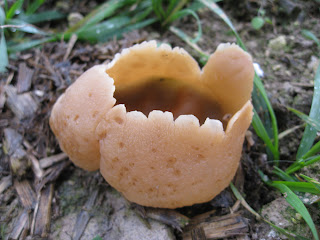