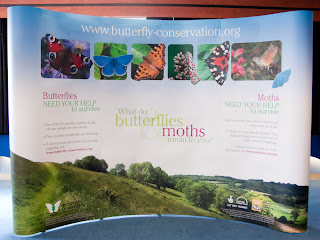 This year the Butterfly Conservation AGM and Members Day was held at Cheltenham Racecourse so we drove up on Friday afternoon and stayed at the local Travelodge (£20 booked well in advance).
The event was very well organised by the Gloucestershire Branch and attended by 250 BC members from all over the U.K. The formal presentations by BC officers at the morning's AGM were professional and interesting and gave great confidence in the way BC is managed.


The afternoon presentations were varied:-


Mike Barry, Head of Sustainable Business at M&S, who are a BC partner, gave a impressive presentation on what Marks and Spencer are doing for sustainability. More power to them, they appear to be leading the way and we hope other major retailers will rise to the challenge.


The state of butterflies in the UK: the results of the BNM survey 2005-9 by  Jim Asher, Council member and Chair of Conservation Committee 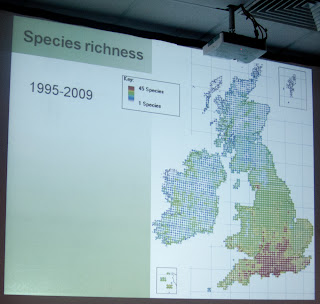 
Studies of Fritillaries in Gloucestershire by Matthew Oates, Nature Advisor to National Trust. Matthew regularly broadcasts about butterfly matters on radio and TV:


Mike Dilger, BC Vice President and presenter on the One Show talked about his background studying moths in Ecuador and showed clips from his One Show programmes which featured Butterflies: 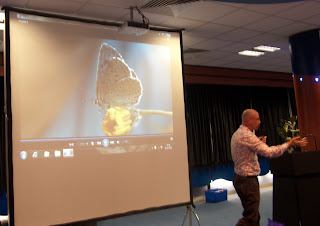 There were many stalls which featured everything to do with the butterfly world including books, plants, photos and apparatus of various kinds. I bought too many books!
We also met up with Neil Hulme, retiring chair of BC Sussex. We enjoyed the day very much and look forward to next year's AGM on November 17, 2012, probably at Nottingham.
at 11:04