to view a gallery with more photos, click  here
On Wednesday morning we had the final conservation work party at Heyshott this year. Neil, Mark and Katrina joined me and we enjoyed Murray Downland Trust hospitality with mulled wine, mince pies and sausages. Afterwards I visited the Arundel WWT. I went again yesterday when the sky was blue and the light good. There were many species of wildfowl and other birds in the reserve: Black-headed Gull, Blue Tip, Canada Geese, Common Pochard, Common Snipe, Coots, Cormorant, Gadwall, Lapwing, Mallard, Moorhens, Mute Swans, Shelducks, Shovelers, Song Thrush, Teal, Tufted duck, Wigeon. A Buzzard overhead flew overhead yesterday and I saw a Kingfisher four times. I also spotted clumps of Oyster Mushrooms for the first time.
Heyshott work party: 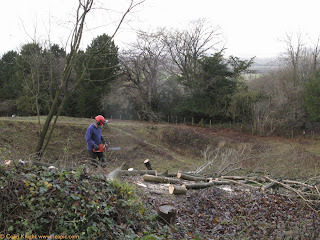 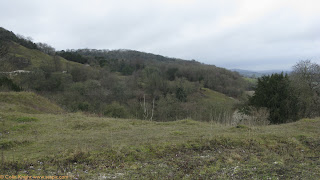 One Coot swam aggressively over to the Moorhen, which was feeding on the bank. There was a stand-off, then the second Coot came over and joined in. The Moorhen stood tall. The Coots then swam off, probably whistling as if they didn't know what all the fuss was about.


Four Snipe flew from another island to this one.
Five Cormorants dried themselves on the island