Edward III half groat & buckle with pin and plate

On Sunday we had a club dig and some good finds were uncovered. Mine were a Edward III Silver Half Groat (1363 – 1369) and a double loop oval buckle complete with pin and gilt shield-shaped plate.
Obverse: 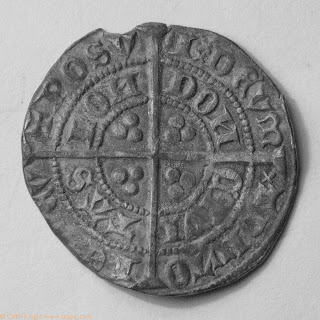 Reverse:
Outer: POSVI DEUM ADIVTOREM MEUM (I have made God my helper)
Inner: CIVITAS (City of )

http://www.vosper4coins.co.uk/ivanbuck/buck-1.htm :
In 1360 the Treaty of Bretigni was signed. Edward no longer had jurisdiction over and his claim to was dropped from the legend of the coinage until 1369. needed a cross Channel trading base and this was achieved by another treaty with which enabled to use , where a mint was established. The Transitional Treaty Period groats of 1361 had the French title omitted and these coins are scarce. The mint mark in use is the cross potent (above the crown on the obverse side).