Our first dive this morning was at Barracuda Giri, which has been a favourite site of mine since 1986. Adel was my dive buddy, Abdullah couldn’t dive as he was within 24 hours of his flight. There was hardly any current so it was a gentle and enjoyable dive. The second dive at Thulaghiri North yielded 4 nudibranchs which was great as I haven’t seen many this trip. 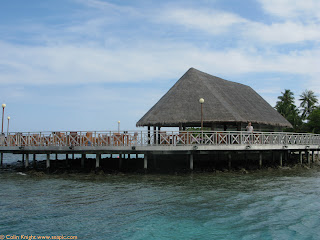 This is the one pull slip knot used to tie the fenders up.
One Cleaner Wrasse is cleaning parasites from the mouth, and another is behind the eye!


Thulaghiri North:
After my massage at the Anggerik Spa in the afternoon I walked past the Garden plot next to the soccer field. I decided to check out the weed patch and to my amazement a bright orange butterfly flew past. It settled and I was able to obtain upper and lower wing shots.  I later identified it as a Peacock Pansy, Precis almana, and the underside shows it is the wet season form - don't we know it!

In the same area I also spotted a tiny blue butterfly which I managed to photograph. It had a damaged right wing, but then I spotted another specimen which was perfect. It does not have the orange spots as the 2010 specimens, and I believe it to be a Lesser Grass Blue, Zizina otis which occurs in Sri Lanka. It was about the size of my small finger nail! That makes two small blue species on the island. The Small Cupid emerged  later - latter part of November in 2010 and 2011, and was in a different place.

Abdullah spotted a large butterfly (which I now believe to be a Danaid Eggfly, Hypolimnas misippus) outside room 188, so 3 species are flying. My two were spotted during the last hour before sunset on my last day - amazing luck. I showed our waiter, Shafi, the butterfly photos and he said there are lots of the Peacock Pansy, but not many of the Lesser Grass Blue. Maybe that is because of their tiny size, they can easily be mistaken for small moths of which there are plenty. I  leave Bandos at Monday.

The Peacock Pansy is found in India and South East Asia, and eastwards to China and Japan: details in Wikipedia: http://en.wikipedia.org/wiki/Junonia_almana

I had 30 minutes to spare before the airport boat on Monday morning so I went to the Garden area again. I immediately saw a flash of orange and this beautiful butterfly landed on green leaves (first photo on this page) – much better than yesterday’s sand bags! Then I saw the wing damaged  Lesser Blue Grass again and obtained some shots of his good side. 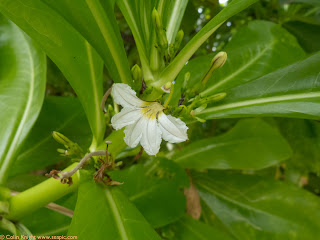 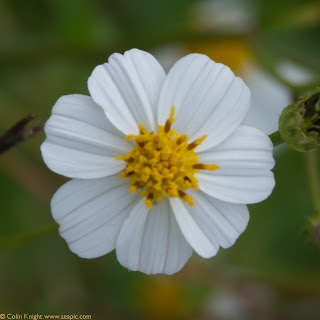 I am completing this at the airport. They have now banned alcohol consumption at the airport so the cold beer treat of past years is sadly at an end. The duty free area has been completely revamped again. Now waiting for boarding and the 10 hour flight to Gatwick. This BA flight is the best way to travel to the from the .
at 05:30