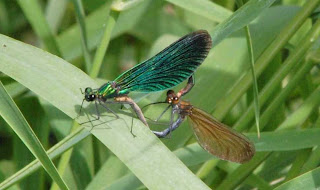 Glad because we spent the morning at Warnham Nature Reserve. We arrived just after it opened and just in front of a school party. At the Heron Hide we watched a Great Crested Grebe swallow a huge fish after several attempts. There were two adults and a youngster in grey plumage. Found a Meadow Brown with its wings open, maybe due to the lower temperatures early in the day. The jewels today were Brilliant Emerald dragonflies. Several of them were settling on reeds by a bridge and one soon became part of a mating pair.

Sad because we attended Don’s funeral this afternoon. He and Maggie have been good friends of Sue’s in her congregation for many years and Don kept her in touch with things by email when we were in Saudi. The service was well done, we learnt a lot about Don, who had been in ill health for a long time and passed away peacefully last week aged 82 years. He was a kind and gentle man and will be missed by all who knew him.