Tudor groats and a bag seal

Last Sunday on a club dig I was fortunate to find two Tudor groats, the second time I have found two hammered coins in one day. Both are very worn as is usual with coins of this period. In addition they have suffered from plough damage. They are both about 25mm in diameter. Groats were worth 4 pence.

The first coin is a Mary groat.
obverse legend:
MARIA D G ANG FRA Z HIB REGI
Mary, by the Grace of God, Queen of England, France and Ireland
There are annulet stops and a pomegranate (the badge of her mother, Katherine) after MARIA.
reverse legend:
VERITAS TEMPORIS FILIA
Truth is the daughter of time

This is an article about the Mary groat: http://www.ipnumsoc.org.uk/articles/ATudorGroatRevisited.pdf :
Mary I was the daughter of Catherine of Aragon and Henry VIII. She was born in 1516 and in 1553 succeeded to the throne following Edward VI’s death. Mary married Prince Philip of Spain in 1554 and died in 1558. During her reign she attempted to reverse the Protestant reforms of the English church, gaining the appellation “Bloody Mary”.
The Mary I groat was in production for just one year before she married Philip of Spain, leading to the production of a new coin, probably in 1557, the Philip & Mary groat, which was the second coin I found:

Obverse legend:
PHILIP.ET.MARIA.D.G.REX.ET.REGINA
Philip and Mary by the Grace of God King and Queen

Reverse legend:
POSUIMUS DEUM ADIVTO NOS
We have made God our helper

I also found a fertiliser bag seal by Webb & Sons:
http://www.bagseals.org/gallery/main.php?g2_itemId=230 :
Edward Webb began his business as a seed merchant c1850 near Stourbridge. In 1894 the company aquired a bone manure works in Saltney near Chester. They were appointed seedsmen to Queen Victoria.
side 1: WEBBS surrounded by REGISTERED TRADE MARK.
side 2:  MANURE MANFRS surrounded by WEBB & SONS SALTNEY CHESTER 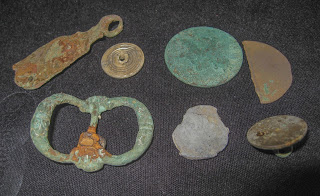