William III halfpenny, a foxy button and a thingy 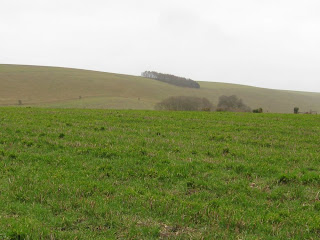 We had a club dig near Steyning today. A cold wind blew and drizzle occasionally covered the downs. My haul included a William halfpenny dated 1699, a livery button with a fox surrounded by gilt, two other buttons, and an unidentified thingy. 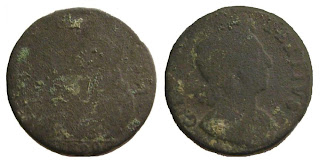 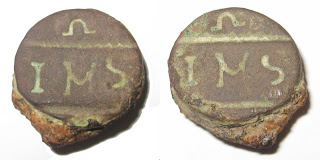 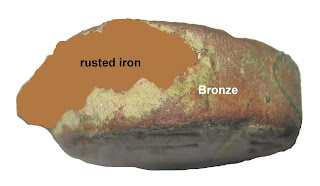 The thingy, diameter = 16mm, thickness = 6.30mm, weight = 7.49g, bronze outside, iron inside. A flat piece of iron is inserted into the bronze disc whose rim is complete on half the circumference.  The same script appears on each side. Answers on a postcard please!
note added Nov 10: Nick suggested this is the end-cap of a knife. This looks right. These two records on the UKDFD database show similar items: one Roman, two  Medieval: 1526 and 1527. An iron tang is a projecting element connecting a knife or sword blade to the handle and is the part I marked as rusted iron in the image above. My description on the PAS database is:
Post Medieval cast copper alloy slightly irregular oval discoidal end-cap of a scale-tang knife with the stub of the iron tang remaining in the cleft. It is closed at the top, the end of disc being plain. Engraved on both flat faces are three letters which look like I M S between two horizontal lines. The top curve of the S is missing on both faces. Above the top line is the omega symbol O. It is 16.04mm wide by 16.46mm long by 6.19mm thick and weighs 7.49g. Several similar knife stops are recorded on the database, e.g. SUSS-F15AF4, DOR-55A6C1 and NMS-ED0EE1. Alternative names for the end cap of a knife are stop, pommel or terminal.
This describes the parts of a knife: http://en.wikipedia.org/wiki/Kitchen_knife
My flights of fancy: the letters IMS or IHS could indicate Christian symbolism: IHS being associated with the name Jesus and the Greek letter omega Ω could refer to "I am the alpha and the omega" from the Book of Revelation.
I will be interested to hear what our FLO concludes after seeing it. 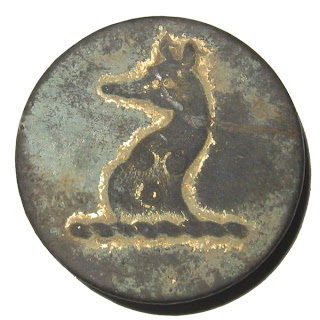 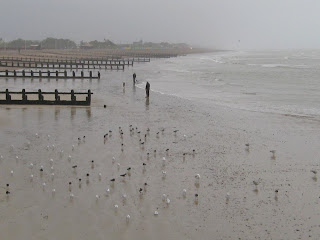 Yesterday we fought the gale and walked to the pier and back.
at 21:00