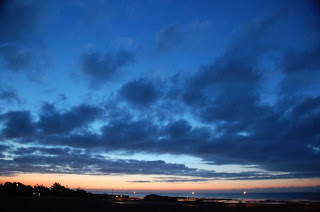 We catch some wonderful sunrises if we emerge early enough. This was taken three days ago at . The days are starting to lengthen, dusk is now around instead of a depressing in December. Oyster catchers were foraging on the green yesterday and gulls were aggressively investigating what the attraction was.

The past day has been spent getting rid of a nasty piece of malware called nugel.E. on my desktop pc. It was deeply embedded and removal programs wouldn’t shift it so I had to manually erase suspect files and registry entries. That took a whole day as I had to repeat the exercise several times until the little b… did not return. I thought I was well protected with AVG and a firewall, now I have a bunch of other programs to assist. This is the first time I have had a serious problem in 15+ years of internet use.
at 15:33