Bernwood Meadows and the North

to view a gallery with more photos, click here
On July 3 we set off for Sheffield on the first leg of our northern tour. As the weather was dry I had planned a side trip to Bernwood Meadows near Oxford, a known haunt of the Black Letter Hairstreak. I promised Sue to return to the car park within 30 minutes and headed for the hedge where I had glimpsed a couple of the critters previously. The meadows were heaving with Marbled Whites and Meadow Browns and the hedgerow had plenty of Ringlets. In the distance I saw another enthusiast and was told that a BH had been perched 10 feet up and 20 feet away for the last 20 minutes. Then Phil appeared, we had met at Beeding Cement plant during the Long-tailed Blue hunt two years ago - small world. No BH this day, but weather permitting, we would be passing the same area on the return trip on 12th.
The Sheffield garden can be described as semi-wild so I spent some time hunting for insects there and found moths, spiders and flies.
On 4th Nute arranged a family lunch so we were able to see four 'nieces'. Beth (9 yrs) ws interested in taking photos and I was impressed by her ability to understand the cameras controls, she didn't need telling twice. Sue and I walked through Endcliffe Park and I picked up more insects there.
It will take some time to process all the photos from the trip so the posts for these will be interspersed with current trips.
garden:

July 4, garden:
I only noticed this mite when I looked at the photo of the wasp below 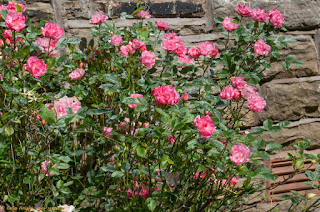