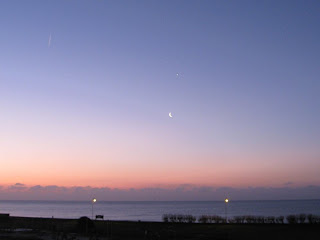 sunrise
Yesterday I attended a Weekend Wanderers dig at Twyford, Hampshire. It was a sunny day with a cold wind. We worked three fields. Within 20 minutes I had a George 1807 halfpenny and a Roman radiate from the first turned over field. After that I had nothing until the end of the afternoon when a very worn George halfpenny and a Guano (fertiliser) sack seal turned up from the second field. As usual it was well organised with FLOs at the refreshments table to identify finds and record those that were very interesting. They advised that my radiate was 260-274AD and recorded it. I saw several other Roman coins and heard there had been around 10 found. I also saw a lovely jetton from the second field. 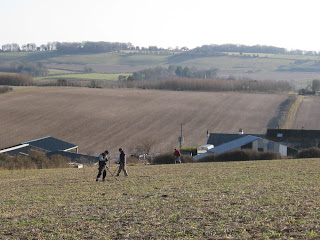 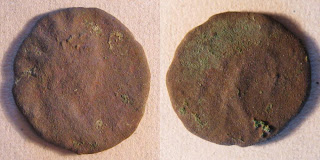 Radiate - crowned head on obverse, figure of man on reverse


description of barbarous radiates
Click for image of a similar radiate

George  1807 halfpenny.
Under flashlight you can see an outer coating on the obverse which is partially intact. 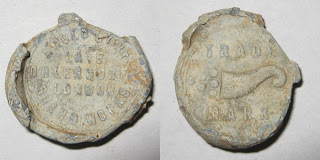 guano bag seal
weight = 11.87g, diameter = 21.5-27.4mm
A lead seal of the 'bulla' type from a bag of fertiliser made by The Anglo-Continental Guano Works of Silvertown (London Borough of Newham). One side has an inscription, which reads ANGLO-CONT LATE OHLENDORFF LONDON GUANO WORKS. The other side depicts the company's logo, (possibly a flared spreader discharging fertiliser) with the words, TRADE MARK, above and below.
Ohlendorff & Co., had been founded in 1873, and remained a German company until the First World War, when it was reconstituted under British control as The Anglo-Continental Guano Works. It was taken over in 1937 by Fisons Ltd. and closed in 1946. The present seal will therefore date to the period, c.1914-1937.
The bulla - a disc with a tunnel from side to side through which a string is passed - became a popular form of seal during the 18th century. It was found to be more versatile than the rivet-type seals hitherto used on cloth, as it could be attached to a wider range of goods, including the bags, bales and sacks in which they were distributed. The method of sealing was to pass the ends of the package's tightened drawstring through the tunnel in the blank seal. The latter was then die-stamped to impress the design and grip the string.
at 14:19